After spending six weeks in big cities, I was feeling the burn. As amazing as it’s been, eventually there’s some overwhelm that creeps in. Seeing the amazing sights and going out with new friends on most nights was starting to take a toll on my body and my state of mind. I needed rest and respite.

Some new friends (Berlin locals! It’s so great to have friends who actually live in the town you’re in.) gave me a few suggestions for places to check out, and after careful consideration I decided on Lübbenau, only about 45 minutes southeast of Berlin by train.

Many different towns in Germany have a “claim to fame.” It’s something special that they’re known for and hopefully they’re the best at. Lübbenau has three: pickles, smoked fish, and the beautiful canals of the Spreewald.

Pat of why I chose Lübbenau was the opportunity to stay in a giant pickle barrel. It’s a unique experience that I don’t think you can get anywhere else. So if I live in a pickle barrel, naturally that means I must be a pickle. Humans don’t live in pickle barrels. Pickles do.

Of course I ate a fair amount of pickles too, which makes me a cannibal? Most all sandwiches I had contained pickles, and they also sell individual canned pickles for a snack.

As if pickles weren’t enough, there are some fish smokers and small snack stands that sell sandwiches with an array of different smoked fish. I love smoked fish!

Also, one night for dinner I just bought a big slab of smoked salmon and ate it with an orange and a roll left over from breakfast. It was enjoyed in the cozy confines of my beautiful barrel.

The Beautiful Canals of the Spreewald

The Spreewald is home to a traditional irrigation system that contains hundreds of small canals. For a small fee (I spent €8 for two hours) you can rent a kayak from one of several boat rental establishments. Alternatively, you can go on one of the guided gondola tours in a group of as many as 24 per boat.

This is no Venice, though. You paddle straight through the forest, with the roots of alder, birch, and willow groves lining the edges of the canals. Sometimes the trees break into open fields with dome shaped haystacks. There are small farm houses and an occasional old man with a fishing rod and/or a beer.

During summer there are apparently many more tourist boats, but I was there during fall so mostly I had the forest and the open water to myself. The leaves were all turning various shades of yellow and orange and there was a faint scraping sound as the dead leaves that had fallen in the water scraped past my plastic kayak.

At one point I stopped to watch one lonely leaf fall from the highest branch. It made a slow, circling descent that took so long I thought it might be a moth or small bird. I thought there was no way that one little leaf could fight gravity for so long. Eventually it touched down in the water near me. It was such a beautiful moment. I was overjoyed that I could be there at that exact moment to see that leaf swoop and stutter to the ground.

But impermanence is the nature of things. I took a moment to appreciate it, then paddled on around a bend in the stream. Then the wind picked up and hundreds of leaves just like my leaf from one minute prior were doing the same dance, swirling around each other and spinning to the ground all around me.

What a joy it would be to be able to appreciate every single one of them the way I appreciated my leaf! It made me think of all the people I’ve met– on my travels, before I left, and honestly probably also in the future when I get back to “real life.” My personal world has been a strange, unexpected whirlwind the past year, meeting so many new people and creating new connections. That’s just the way it is, and it’s built into the nature of travel as well. I wish I could dedicate the time and really get to know all the people caught in that whirlwind. Everyone deserves to be known and appreciated and if I had infinite time– infinite lives to live– they would. But I’m just one little pickle in this world. All I can do is my best. 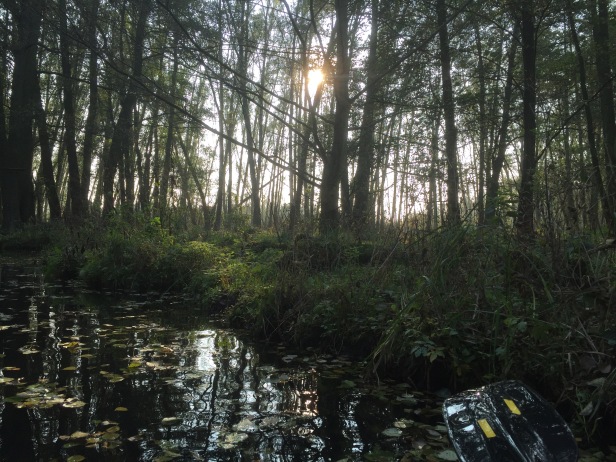 Lübbenau was a good diversion from the hectic nature of central Europe’s major cities. It was truly beautiful and I got some good thinking done out there on the calm waters. It’s a wonderful little town and it came at the right time in my journey.

If you get a chance, you should go paddle around and eat some pickles in Lübbenau. Maybe you could even stay in a pickle barrel and become a pickle yourself.